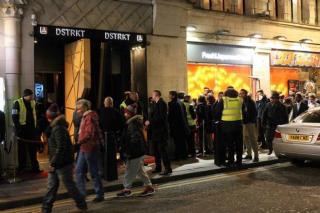 Police and clubs are launching a pilot scheme to enable doormen to breath test revellers they suspect are intoxicated so they can bar them from entry. The limit for testing “positive” will be set at around twice the level for the drink driving limit. Officers hope the scheme will cut down on binge drinking and “pre-loading” where young people get drunk on cheap drinks before going out. The measure is one of several initiatives being launched by the Met in an effort to tackle rising rates of violent crime in London. Figures show that while most crime in London is falling, the number of violent offences is rising rapidly with increases of up to 39 per cent in some boroughs. Senior officers believe some of the rise is explained by more thorough recording of offences but admit there has been an increase in drink related violence in town centres. The initiative also follows concerns over safety in some London clubs. Fabric nightclub was saved from the threat of closure last year over four drug-related deaths after bosses were ordered to bring in tough entry conditions, including having to hire seven sniffer dogs. The Met launched Operation Equinox in an attempt to reduce the number of violent offences by targeting pubs, nightclubs and fast-food outlets. One initiative is to use breathalysers to screen people getting into clubs. Police have tested the idea in a small number of clubs in Croydon and now plan a more organised pilot scheme in six different London boroughs. Chief Inspector Gary Taylor said the anecdotal evidence from clubs in Croydon showed it was a success. He said: “They have told us that it did help reduce violence and confrontations involving door staff. The breathalyser helped to stop people who were persistently trying to get into clubs when they clearly had to too much to drink. “The breathalyser helps to reduce the number of arguments when door staff refuse entry to someone who is intoxicated. In the past door staff would get involved in long arguments with people who were refused entry. People who were arguing with staff were more likely to accept the results of the breathalyser.” London nightclub impresario Mark Fuller, who runs the Embassy in Mayfair, welcomed the idea in principle but warned police not to set the limit for the breath test too low. He said: “I think it’s an excellent idea. I think most violence in clubs comes from people who have had too much to drink and it will create a level playing field. It is a bit Big Brotherish but it will be one rule for all. If you get someone with loads of money who is completely pissed then they do not get it. “But the opinion of the authorities on alcohol levels compared to what the average person consumes in a night are quite adrift. Club going is meant to be a fun night out so I hope they don’t try and take the fun out of it.” Police say it is too early to say if the device helped to reduce levels of violence. A similar scheme has been run in Norwich where signs titled “Are you trollied? #DeepBreath” are displayed in venues explaining that clubbers may be required to take a breath test as a condition of entry. Story via Evening London Standard
https://hotspots.ie/wp-content/uploads/2015/02/image.jpg 213 320 Mr.Hotspots https://hotspots.ie/wp-content/uploads/2016/03/Hotspots_logo_web.png Mr.Hotspots2015-02-01 15:47:252015-02-01 15:47:25Club goers face being breathalysed before being allowed entry into London venues.

VIDEO: Will Ferrell Lip Synch to Beyoncé’s “Drunk in Love̶...
Scroll to top